What is the complaints procedure for a complaint against a maintained school?

Under section 39 Education Act 2002, a ‘maintained school’ means
“a community, foundation or voluntary school, a community or foundation special school or a maintained nursery school“.

Every maintained school and maintained nursery must have a published written complaints procedure (section 29 Education Act 2002). The government has also issued Departmental Advice called “Best Practice Advice for School Complaints Procedures 2016“, to help schools and Local Authorities understand their obligations under the law.

Below you will find a flowchart explaining the procedure for a complaint against a maintained school.

Complaint against a maintained school – Flowchart 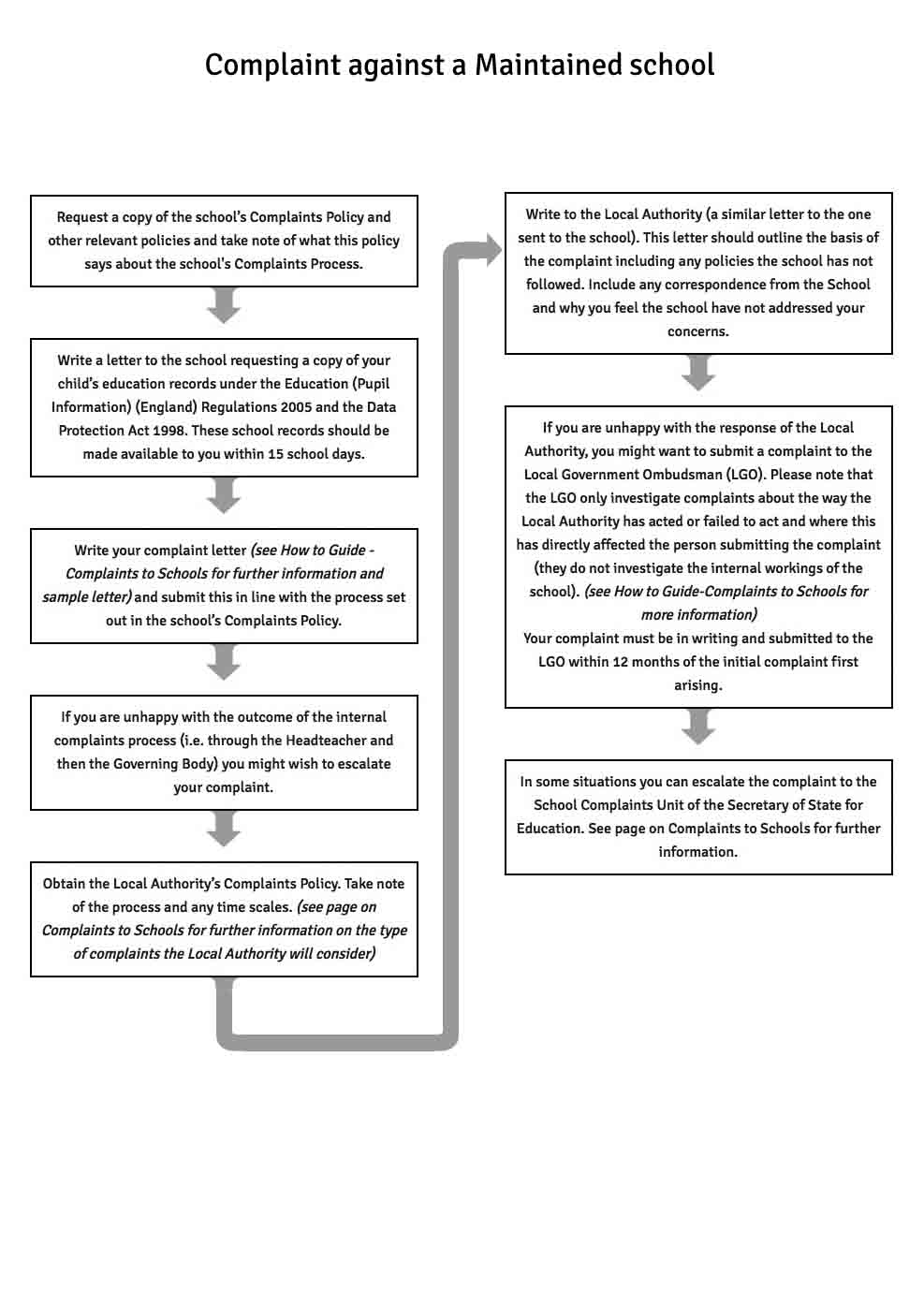 Who can make a complaint?

Complaints can be made by parents, carers and members of the wider community. Complaints can also be made on behalf of an ex-pupil of the school.

What information do I need to make a complaint?

You may also wish to ask for disclosure of your child’s educational records under the Education (Pupil Information) (England) Regulations 2000 and the Data Protection Act 1998. These records should be made available within 15 school days. Please note the school can charge a fee (maximum of £50) for photocopying but not for viewing these records.

What stages of complaint are possible?

The government’s Advice recommends a 4 stage procedure for complaints, if this is appropriate, as follows:

Each school may have a different procedure for complaints but it is very common for an initial complaint to be made in writing to the head teacher of the school. It is also good practice to send a copy of your complaint to the Chair of Governors.

Your complaint will then be addressed either through correspondence or through a meeting with the Chair of Governors depending on the school’s complaints procedure.

There should be a reasonable timeframe for dealing with the complaint and the school should inform you of any deadlines and delays.

What happens at the Governing Body Review?

Governing bodies are expected to regularly monitor and review complaints received by a school. The Governing Body Appeal Panel can reach any of the following decisions when considering a complaint:

The governmental Advice recommends that there any Governing Body Review Meeting is served by a ‘Clerk’, whose role includes:

It is also recommended that the Chair of Governors chairs the meeting.

What outcome can I expect from the school?

When making the complaint, you should consider asking the school for the list of available remedies. The governmental Advice recommends the following types of outcome:

Can I complain again if I am dissatisfied with the outcome of the complaint from the school?

There should be a procedure in place for escalating a complaint if you are unhappy with the outcome. Usually, a school will not look into a complaint about exactly the same issue where it has already been considered; there is a risk that the complaint is deemed to be vexatious if you try to pursue the same complaint.

Can I make a complaint to the Local Authority?

The Local Authority can look into the following complaints:

Parents can ask a Local Authority to intervene under section 62 School Standards and Framework Act 1998. This provision gives a Local Authority the power to take such steps as it considers necessary to prevent the breakdown, or continuing breakdown, of discipline in a school. The power can only be exercised where the Local Authority is of the opinion that the behaviour of certain pupils is severely prejudicing the education of other pupils. For more information regarding this please see page on Bullying.

It is important to note that not all Local Authorities will look into school issue complaints, particularly if they feel it can be addressed within the internal school management system.

Most Local Authorities will operate a 3 stage complaints process such as:

Can I make a complaint about teacher misconduct?

You can report serious professional misconduct of a teacher to the Teaching Regulation Agency (TRA). The TRA will only look into cases where the misconduct could result in that teacher being disqualified; this could include:

The TRA cannot look into complaints about a teacher’s performance or competence.

Under the Teachers’ Disciplinary (England) Regulations 2012, the TRA can only look into allegations against teachers who are, or have ever been, employed or engaged to carry out teaching work at:

and when employed in these settings have been engaged in:

To make a complaint to TRA, you must first have tried all local complaints procedures including contacting the school’s head teacher and/or chair of governors and contacting the Local Authority.

To make this complaint, you should use the teacher misconduct referral form and include:

Can I complain to the Local Government Ombudsman?

The Local Government Ombudsman can look into the following complaints:

What is meant by causing an ‘injustice’?

If you decide to pursue a complaint through the Local Government Ombudsman, please note that a complaint must be made in writing, within 12 months when you first became aware of the matter being complained about.

The LGO will then decide whether there has been maladministration and make recommendations. For further information or to contact the Local Government Ombudsman, their advice line number is 0300 061 0614.

Can I make a complaint to the Secretary of State for Education?

If you have exhausted all local procedures for your complaint, it is possible to escalate the complaint to The School Complaints Unit of the Department for Education in some situations.

The School Complaints Unit can report any breaches of policy or legislation to the school and direct for remedial action. If a school fails to do this, the Secretary of State for Education can issue a formal Direction to the school.

Can I make a complaint to OFSTED?

Ofsted can hear complaints about problems which affect the whole school, after you have exhausted the internal complaints procedure – for example, the quality of education, poor management or leadership or neglect of a group of pupil’s personal development and well-being. The government has issued guidance for parents and carers on Complaints to Ofsted about schools.

Ofsted will not investigate cases about:

Ofsted should respond to your complaint within 30 working days.

Can I take legal action against a school?

You may be able to take legal action against the school your child attends. You could instruct a solicitor specialising in Education to write a letter of complaint. This may not be the best course of action as could affect the relationship between you and the school. There is no longer any Legal Aid available for complaint cases.

You may be able to judicially review a school decision if you feel this decision is unreasonable or unlawful. The court will check the actions or decision of the school and can require them to reconsider. You can only judicially review the decision of a state funded school (decisions of independent schools cannot be challenged in this way).

Examples of decisions that could be judicially reviewed are:

You would need to seek legal advice to take such action. To find a solicitor who specialises in education if you are eligible for legal aid please contact Civil Legal Advice on 0345 345 4345. Otherwise, please visit the Law Society website for solicitors who are available in your local area.

If you have concerns about the way the school treated your child, it may also be possible to bring an ‘educational negligence’ case for your child. This must be brought before your child reaches 21 years of age.

To establish educational negligence, you would need to prove the following:

This information is correct at the time of writing (Dec 13, 2018 @ 10:02 am). The law in this area is subject to change. Coram Children’s Legal Centre cannot be held responsible if changes to the law outdate this publication. Individuals may print or photocopy information in CCLC publications for their personal use. Professionals, organisations and institutions must obtain permission from the CCLC to print or photocopy our publications in full or in part.