What is the complaints procedure for a complaint against an Academy School?

The government has issued Departmental Advice on making a complaint against an Academy entitled “Procedure for dealing with complaints about academies“.

The Education & Skills Funding Agency is under an obligation to ensure that Academies stick to their contract with them, which is called an Education Funding Agreement.

Below you will find a flowchart explaining the procedure for a complaint against an Academy school.

Complaint against an Academy school – Flowchart 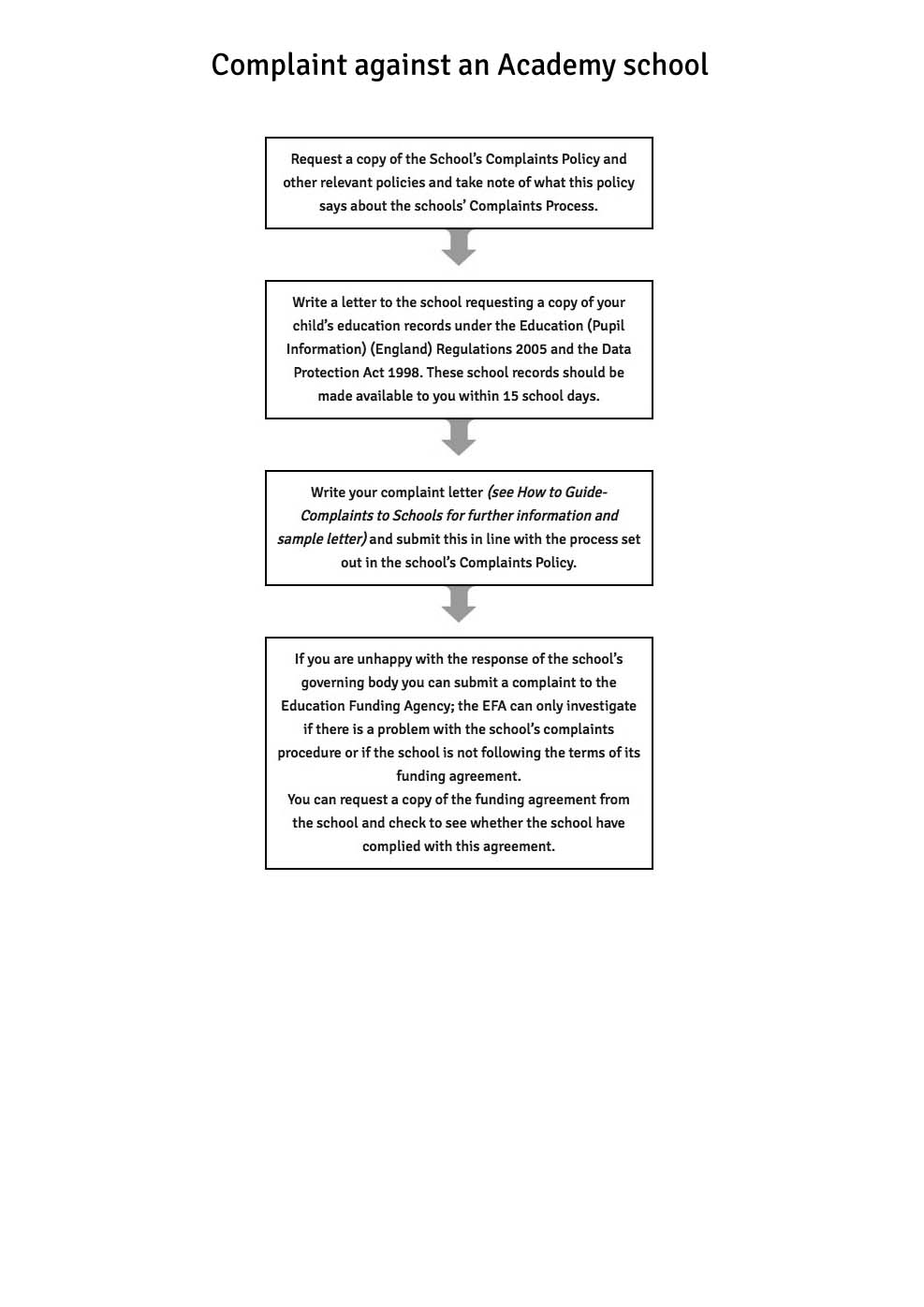 How do I make a complaint to the Academy?

You should first complain to the Academy itself. The school’s complaints policy must be in writing, available to parents and set out clear timescales for how complaints will be handled.

If you are a parent of a pupil at the Academy, the complaints procedure must comply with The Education (Independent School Standards) Regulations 2014, Schedule 1, Part 7. The complaints process should have 3 stages:

1. Informal Stage – usually an informal meeting between complainant and staff.

2. Formal Stage – complaint is submitted in writing to the school.

3. A Panel Hearing. If the matter proceeds to a Panel Hearing, the school must allow the complainant to attend that hearing (and be accompanied if they wish) and have at least one independent panel member (independent of the management and running of the Academy).

If the complaint is from someone other than a pupil’s parent, the Academy can handle this complaint differently to above.

Can I make a complaint about teacher misconduct?

You can report serious professional misconduct of a teacher to the Teaching Regulation Agency (TRA). The TRA will only look into cases where the misconduct could result in that teacher being disqualified; this could include, for example:

The TRA cannot look into complaints about a teacher’s performance or competence.

Under the Teachers’ Disciplinary (England) Regulations 2012, the TRA can only look into allegations against teachers who are, or have ever been, employed or engaged to carry out teaching work at:

and when employed in these settings have been engaged in:

To make a complaint to TRA you must have tried all local complaints procedures including contacting the school’s head teacher and/or chair of governors and contacting the Local Authority.

To make this complaint you should use the teacher misconduct referral form and include:

What if I am unhappy with the Academy’s response to my complaint?

If you are dissatisfied with the academy’s response, you should then address your complaint to the Education and skills Funding Agency (ESFA). The ESFA will not usually investigate complaints more than 12 months after the decision or action was taken.

Matters which the ESFA will investigate:

Matters which the EFA will not investigate:

What are the possible outcomes after the Education Skills Funding Agency?

If the ESFA finds that the Academy has not dealt with a complaint properly, they will not overturn the Academy’s decision but will ask it to reconsider and ensure that the decision complies with the relevant Regulations.

Such actions may include asking the Academy to review:

If the Academy does not comply, the Secretary of State may, if appropriate, seek to enforce the terms of the Funding Agreement through the courts.

When can I complain to the Secretary of State?

Before you can complain to the Secretary of State, you must have exhausted all of the above complaints procedures.

The Secretary of State will consider the following types of complaint:

To start the procedure you will need to write a letter detailing your complaint with all relevant documentation to the Department of Education.

The following are grounds of Complaints to the Secretary of State:

It is worth nothing that the Secretary of State can take 6 months to respond to letters of complaint and very rarely finds it necessary to become involved.

The Secretary of State can make directions as they consider appropriate to ensure that the Governing Body or Local Authority exercises its duties, functions and powers as it should.

This information is correct at the time of writing (Mar 16, 2020 @ 12:33 pm). The law in this area is subject to change. Coram Children’s Legal Centre cannot be held responsible if changes to the law outdate this publication. Individuals may print or photocopy information in CCLC publications for their personal use. Professionals, organisations and institutions must obtain permission from the CCLC to print or photocopy our publications in full or in part.